The original story has a simple plot which I follow:

Biddlekin, a young, rebellious and ‘ne’er-do-well’ fairy neglects his lessons and training, and after a lazy summer season is banned from the warm and secure underground winter festivities. Unable to cope with winter and hunger, he takes refuge in a dolls’ house in the playroom of a large house. The two young children, whose noise and size at first terrify the visitor, are delighted with his presence, a secret close-kept from adults. But not having learnt constructive ‘magic’ he shows off or loses his temper with negative tricks which he cannot reverse, and this gets the children into more and more trouble. He is disruptive and selfish, and his only way out is to make for the closed doors of the winter palace, beg for admittance and face up to the discipline his teachers are waiting to impose for his own good.

This tale is freely based on Hilda Adshead’s ‘The Idle Fairy’, illustrated by Anne Rochester, published in 1926 as part of Warne & Co’s Welcome Series for young children. Recently I read it again out of curiosity since every now and again quite by chance I am reminded of something in the story.  I realised then that like so many well-told tales it leaves the reader room for further exploration or another slant on what is actually encountered. My mother read it to us in her gentle,dead-pan, authoritative style, which I can still hear if I listen carefully. The 1930 copy I inherited is now a forgotten and ‘rare’ book.

Such source material is undoubtedly a product of its time. The children, Harry and Mabel, are cared for by an all-purpose nanny, tutored at home, subject to formal routines and disciplines and strictly applied sanctions. Their parents are shadowy figures, who seldom feature in their daily lives. Into this smoothly run upper middle class home comes Biddlekin, a kind of naughty-boy derivative from Eleanor Farjeon’s tribe of flower fairies, complete with neat tunic and wings. He hopes to take refuge from being out in the cold, where he is both literally and socially. He has gallivanted his way through summer, skipped lessons, and could not face being forced to apply himself throughout the underground winter festivities. The children’s excitement over encountering a fairy figure is soon reversed when they find themselves saddled with a selfish, spoilt brat, who, when thwarted, is spiteful, destructive, and not in the least concerned that they have to take the blame for his antics. While young readers’ sympathies are tilted in favour of decent standards and good order, the perverse Biddlekin is someone they can relate to, and there’s a lot for them to enjoy in the disruption and in the adventures of the idle visitor, who gets more than he bargains for in his supposedly cosy winter quarters. And not content with making demands on the children, who lose patience with him, he recruits a widowed mouse to look after his needs, until cowardly failure to rescue one of her children from a cat makes her round on him fiercely as unworthy of his tribe: shouldn’t he know how to protect small creatures?

So here is a ‘fairy’ figure out of place in a human household, learning the hard way that he must return to his own kind and adapt to their disciplines. . But once he has achieved this, he returns stealthily and tactfully to repair some of the destruction brought about by his malicious abuse of transformation spells he had not learned how to reverse.

I follow the pattern of this narrative with its neat and entertaining plot, though I have written in a way that should appeal to a slightly older age group than the original, and hopefully to adult readers as they read it to their children. In line with this I have developed the characters of my children, John and Lisa, who are several years older than Harry and Mabel, rather more ‘streetwise’, and recognisably contemporary, though no less excited by a small intruder who promises to wield special powers. And while the visiting ‘fairy’ has many of the character traits of Biddlekin, his background is more specific and complex.

I avoid the term ‘fairy’, except when human characters use it for want of a better word. Although Hilda Adshead implies that her ‘fairies’ are at best industrious and purposeful, and that a dropout is the exception, the word has become associated with diaphanously-winged miniature beings, sentimentally presented as ornamental, mischievous or wayward. I have gone back to an earlier concept of ‘fairie’, a ‘world’ running parallel with our own and rarely encountered by humans. Its beings, though not subject to our physical limitations, are often intimately concerned with the creative and cyclic processes of the natural world, and when encountered they appear to be larger than life and filled with a multi-dimensional insight beyond our capacity.

Woodsies, as explained early in Chapter 1, are a branch of this race of beings with a specific ‘folklore’ identity and a corresponding behaviour pattern and purpose. Leaflag the renegade woodsy shares Biddlekin’s fear, stupidity and arrogance, but these are made more palpable in my version. Both have stepped badly out of line, first by failing to prepare for the tasks of their tribe’s calling, and secondly by coming into contact with humans, not for a serious, mature purpose, but because their foolish behaviour has left them stranded and with few other choices.

As in my previous verse fantasies I have chosen to narrate, in a free verse medium. The standard and predominant line is composed to have six main natural stresses, for example:

I am not sure if this has advantages or not, though readers who have made recordings of WISH and RAINBOW find it has given them guidance with pace and dynamics. But it is the way I have become used to writing narrative, and to honing down my expression to essentials. Sceptics maintain it’s a waste of ingenuity or makes no difference to them, and publishers are irritated by the oddities of presentation they have to deal with! In this case, especially as there is so much mundane dialogue, I have experimented with turning some chapters into prose; but I was unhappy with the result, and so were my first readers.

My illustrator, Caroline Ward, chose her subjects freely, and she did not see a copy of the original story until long after her own work was finished. She has shown considerable understanding of the spirit and intention of my narrative, and added dimensions to a number of decisive moments and turning points in the tale. I have found her approach most supportive, both in her perceptive comments, but also through her discovery of subtle sources of drama and colour that surprised me into a new awareness about my own work. 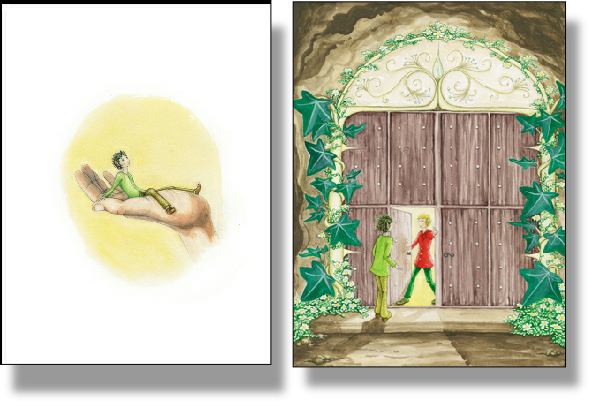 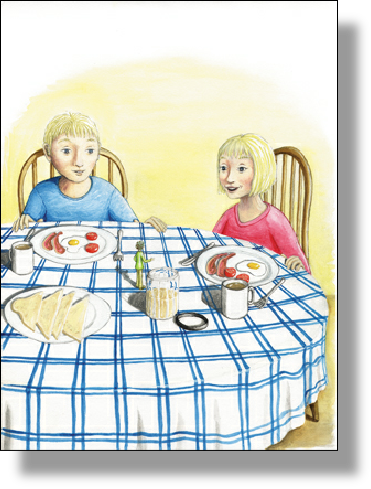 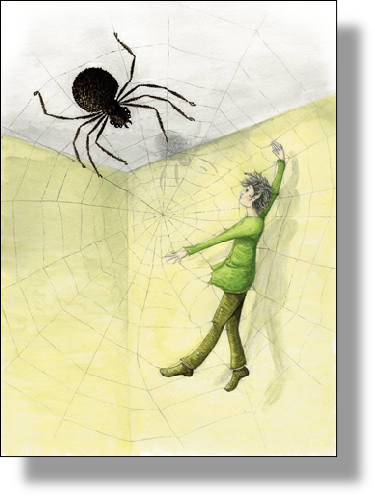 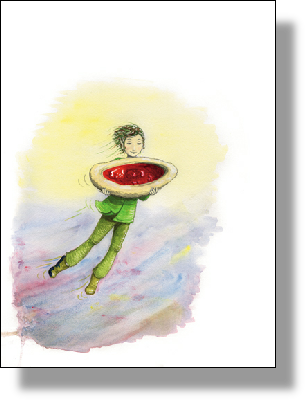 in hardback, paperback and Kindle download, is based on , ‘The Idle Fairy’, a lost tale for young children by Hilda Adshead (1926)

I make more of the anti-hero’s disobedience, wintry isolation and discomfort. And his fear, stupidity and arrogance are more detailed in my version. Also the creatures called ‘fairies’ are now ‘Woodsies’, who have a specific ‘folklore’ identity that includes a consistent behaviour pattern and purpose, suggested in these opening comments:-

Woodsies can take on any human shape,

and have appeared in larger and finer forms

than we can ever hope to have, though mostly

They are mainly practical, wise, and helpful,

but all families have misfits and trouble-makers

won’t grow up and have to learn the hard way.

Woodsies have no wings. They just have to think

to be in another place. Some people who know

their haunts and have quick eyes may have seen

flashes of light and taken them for shiny wings.

My step-daughter, Caroline Ward, on the basis of her own reading and choice of subjects, has provided a series of fine illustrations to point up the most dramatic moments in each short chapter.

Caught by the spider

Shut out of the Winter Palace