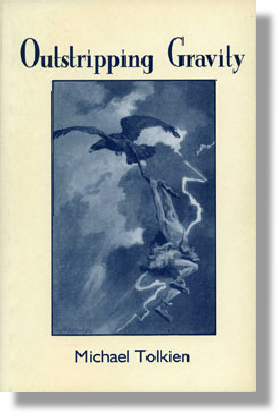 The night of the day I now know you'd died

thousands of miles north of here, I couldn't

face the mad frown of the full tropical moon.

Any moment it would rise from its false-

dawn glow on the rim of cliffs that billow

behind avenues twinkling tier after tier

Had I faced it as I try to in memory of you,

would I have felt anger and confusion

in your spirit, its need to return to the earth

twenty years to the day after you'd first

shouldered the odds against touching down

Not for you that transit jail of ghosts

suspended in their manias and longings,

who once or twice a year stampede towards

us when the tug of waters breaks their bounds.

Only your body dropped, intact but for a bruise

on the nose you said was a nuisance

Hard to believe the morning after the news,

the moon swimming on its back as I paddle

through black sand and the sea's indifference,

till one gull stands its ground then scales sheer

or freak eddy to crumple the kite that makes it

searches and the lives your vision changed,

before soaring into the unexplored on thermals

no bird dreamed of but you had practised,

as if for the long cruise from which you may

come burning back to teach us in other ways

that heights depend on scale and there's more

to flight than flying.

In December 1999 Shoestring Press published Reaching for a Stranger, which complements the earlier collection, Learning Not to Touch, providing a bridge to this, his first full-length book.

The four sections of Outstripping Gravity read as entities preoccupied respectively with rootedness, relationships, notions of escape, the imponderable. But cross-related parallels and contrasts will be found to draw the parts into a whole.

Earlier versions of some of these poems have appeared in:
Agenda, Envoi, Iota, Leicester Poetry Soc. Anthologies'98 & '99, Orbis, Other Poetry, Poetry Nottingham, Poetry Now, Prop, Seam, Staple, Tabla '98, Tears in the Fence, The Affectionate Punch, The Penniless Press, The Rialto, The Swansea Review, This Is.

Thanks are due to Shoestring Press for permission to include two poems from Reaching for a Stranger, and to Tom Tolkien for assembling some of these poems in publishable form (as Turn of the Tide) for the East Midlands Arts New Voices Tour (1998)

The author is especially grateful to John Forth and Paul McLoughlin for their detailed and challenging appraisals and suggestions.
The cover illustration is from a painting by Dorothy Harding in The Book of Myths by Amy Cruse (Harrap:1925) Thiassi carries off Loki attached to the stick with which he attacked the disguised storm giant.

This book can  be obtained from Forest Books, Amazon or direct from the author (use Contact page)