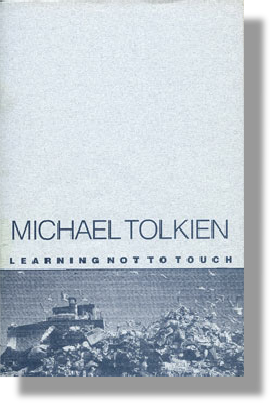 from the overhangs of chalkpits.

We were told to avoid these places.

find things that gave you dreams.

Chalk was something to steal from boxes.

As for flints, we had to copy down:

'For thousands of years men shaped them

by pressure. The Stone Age is still going on

in some parts of the world'. Which explained

all that grinding from the mason's yard.

Then we opened our 'Story of British Nations'

at page 34 and saw a pair of naked

from roots. He had a streamlined crutch,

straggly locks and no other hair.

She was bent double at his feet.

Now I pick up flints among drilled corn

and race through chalk cuttings on the M40.

All poems from this 1998 collection were included, sometimes in revised form, in Taking Cover (2005)

'...Unmitigated love is met with unmitigated contempt. No one , it seems, either wants or can find a use for utter devotion and surrender. Except Messiahs, demons and gods...'
(Graham Joyce: REQUIEM, Michael Joseph, 1995)