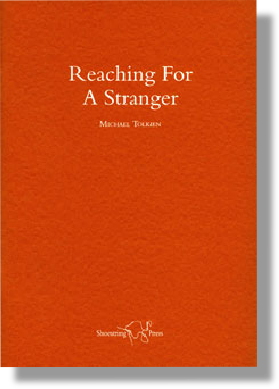 She stood on a mobile
walkway, straw-haired,
between ages, freshly autumnal
for school, as distant as she
felt, though I held her close,
tried to mutter about love,
sending money, being missed,
till turbines tested to screaming
exploded in my chest and woke
me reaching for a stranger.

Floods had closed the road again
and men were drilling their hearts out.

Most poems from this 1999 collection were included, sometimes in revised form, in Exposures (2003)

Three poems from WAYS THROUGH, a four-poem sequence of unrhymed sonnets concerning married love, were omitted as inappropriate for the themes and tone of the later book. The epigraph which introduced them was:

'...a romance where the woman guards herself over the decades by withholding the easy assent her husband only thinks he wants...' (H.Dunmore reviewing Ann Sansom's Romance in Poetry Review, Spring 1995)
The author may include these three sonnets in a later collection.

This booklet as a whole was dedicated to:
Those whose words and ways gave rise to these poems

REACHING FOR A STRANGER