Farmers in an alpine valley are haunted by Faengler, a cunning old enchanter who ruins their lives by using an ancient wishing chain of powerful stones to spoil crops, and steal children, cows and goats. Young Berwald and his sister, Clara, set out without their parents knowing, to climb into the next valley, seize the chain, free their neighbourhood of fear, and wish for whatever they want. But they soon find the wild world beyond their home is full of strange forces, some good, some dark and twisted, and almost every wish they make adds new complications and disagreements. Who can rescue them from this fearful and dangerous adventure? Before Adam, their angry and worried father, can reach them, he must learn to follow leads that seem to be of no use and listen carefully to the tale that lies behind the villain's bitterness. 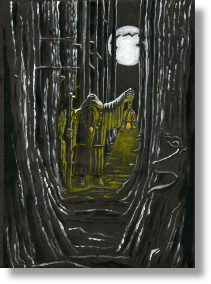 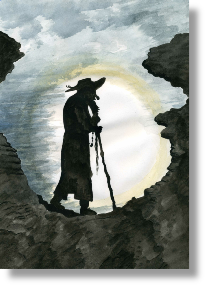 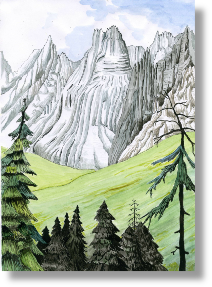 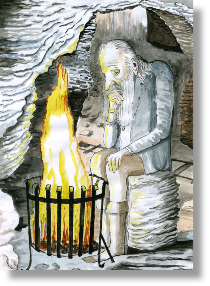 'WISH is a timeless story which children will enjoy for years to come. Michael Tolkien has brought it to life in narrative verse'

Gerald Dickens is an acclaimed actor, director and producer and great-great grandson of Charles Dickens who has made a professional recording of WISH, for which an outlet is being sought

The Guardian newspaper article describing the collaboration of Gerald Dickens and Michael Tolkien in producing the audio version of the book  can be downloaded here.

Is WISH connected to JRRT’s work? 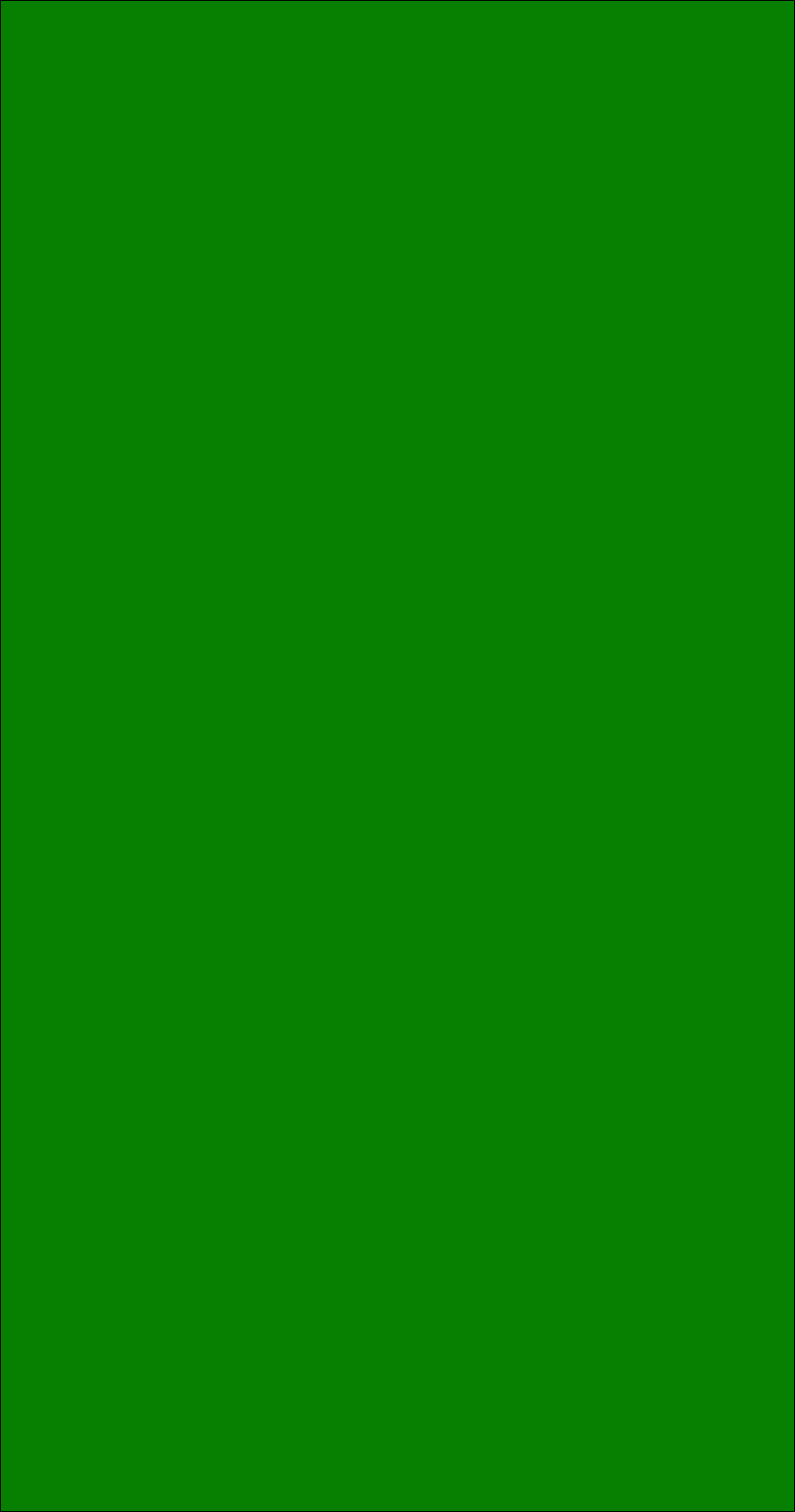 The origin and writing of WISH

The source and inspiration for this narrative poem is a prose fantasy intended for children: The Rose-Coloured Wish, by Florence Bone (1875-1971), illustrated by Kate Holmes and published by Hutchinson in 1923. My mother's copy was part of a collection of my parents' books read to us in young childhood in the late 1940s and early 1950s. I inherited the well-used, battered book and twenty years later my own children asked for repeated readings from it. I later realised that this apparently conventional fairy story combines adventure, humour, and moving character conflicts within a gently imposed moral structure, which feels both inevitable and surprising. Thirty years on a series of holidays in alpine venues reminiscent of the book's setting may have prompted me to pay tribute to its story and qualities. Not critically or by re-publication, but creatively, though for several years I had no idea how.

First I became curious about the book's present status and could find no second-hand copies advertised, and no comments on this particular work. But it became apparent from the many other works of Florence Bone, mostly pre-1939-45 War, available through internet sources and cited in British Library records, that she wrote a wide variety of children's fiction, including historical novels, and was a biographer and writer of well-researched documentaries. And yet she is not mentioned in authoritative reference books and critical essays on 20th century children's literature. Whether or not there's irrefutable wisdom in such eclipses, I am not trying to reinstate a lost author but to bring to life the substance of one forgotten story.
In hindsight I realise I have tried to do so by methods similar to those used by earlier, less literal, translators of ancient or mediaeval literature: to recreate the spirit of the original in new dress. I have retained the narrative structure and the essence of the characters along with their conflicts and developments. These are an intimate part of the moral framework with which I identify and to which I have been faithful.

However, nearly all the names of characters and places are my own; the dialogue and descriptions have parallels in the source but seldom repeat it verbatim. Not change for its own sake but because, in line with the intention of expressing 'inspiration', I have been true to my own style and allowed my imagination to respond to and in some cases to expand on the original. I trust this makes for interior consistency, avoiding apparent dependence on a source or a sense of being second-hand or patched-up.

Some readers may wonder about the choice of verse as a story-telling medium and question whether it works or has any advantages. There are some simple, practical reasons. Verse has long been my chief discipline and mode of expression and through it I felt more confident about creating a relatively sharp, economical and fast-moving dialogue and narrative. It would also help me to emphasise changes of pace and intense feeling, and to slacken tension where humour or mundane comments prevail.

So after a lot of experimenting, I found a compromise between formality and 'common' rhythms of speech and story-telling, and I hope the main body of the tale is in a verse form sufficiently unobtrusive and 'unmannered' for readers either to be unaware of it or to feel its strategies working positively.

In contrast to this plain style, and often highlighted by particular fonts, I have used distinct kinds of verse to characterise the more ethereal figures, such as the robin, and various flowers and insects that communicate
with the children. Generally, persons and creatures who have commerce with humans of all ages speak at a 'normal' pace in the common verse framework. Such distinctions are not derived from my source, nor are the verse prefaces to each chapter. These are in a deliberately formal, alliterating and authoritative style. Some might call it 'stilted'! They are meant to feel like fragments of an older, historically-angled narrative poem, placing some of the persons, places and events into a broader perspective, of which the chief characters are only dimly aware. I wanted to suggest a commonly held belief that all tales, however well-known and 'established' or apparently fantastic, are limited interpretations of a series of events in human history. Florence Bone herself reminded me of this and inspired me to elaborate on it. She includes a background story to throw new light on the life and attitudes of the tale's villain. This is equivalent to chapter XVI in my version where the narrative style is slightly more formal to suggest it is an old tale retold. The response of the man who listens to this episode within the central tale also marks a decisive and quite unexpected turning point in attitudes and developments as the main story comes to a close.

The illustrations provided by my wife, Rosemary, derive from her independent response to reading my version, which she has been the first to see and judge at every stage. Her work might be regarded as yet another layer of interpretations of the underlying story, since she has chosen freely which aspects of it to represent. She had not read Florence Bone's original story until after my work was finished. This was to avoid making comparisons as part of her reaction to my narrative techniques. For obvious reasons she also preferred not to look at and assess Kate Holmes' charming but, to modern eyes, perhaps rather conventional 'fairy-tale' coloured plates, until after her own work was complete.

This book can  be obtained from Union Bridge Books, Forest Books, Amazon,  Barnes & Noble or direct from the author (use Contact page)

For a detailed outline of the narrative, click HERE

The audiobook for WISH is published and available to purchase on Amazon, Audible & iTunes now.  Click HERE for details..